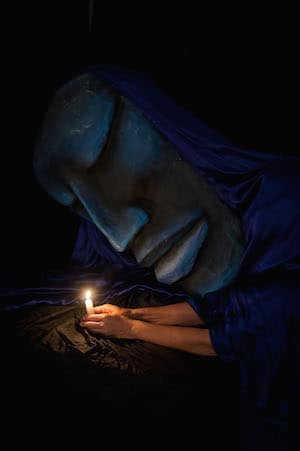 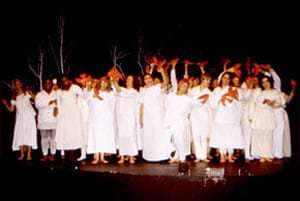 "sure to shake the snow off your boots and the frost from your soul" -St. Paul Pioneer Press

"Nonstop music from around the world...and striking dramatic flouishes...make this a holiday celebration to treasure." -Lavender

A tribute to the beauty and mystery of the winter solstice, the time of darkness when earth is dormant.

Flowing with acapella choral pieces, haunting cello and guitar, lively accordion music, balafon, marimbas and flute – Between the Worlds is a river of music from start to finish.

The evening moves along a ceremonial journey from vibrant color to the stark whiteness of snow, mirroring the dance of crones toward the dark curtain of death.

Through puppetry and masked dance the audience and performers will celebrate the birth of the returning light.

Songs of Dark and Light

When nights are their longest — oh what a time for celebration!

A million nightingales greet a clear bell of moonlight. Wisecracking crones dance their wistful dreams towards the edge of death. Then somewhere deep, deep in the space between breaths, a spark of light is born. With dance, puppetry and song, Between the Worlds will make your heart rejoice.

Heart of the Beast: It’s a Warm Celebration

In the Heart of the Beast Puppet and Mask Theatre could be the warmest theater in town.

The moment one walks through its battered doors into its poster-decked lobby, one senses the aura of community that envelops this neighborhood-based troupe of artists.

The warmth is certainly there for “Between the Worlds: Songs of Dark and Light”, its winter solstice celebration that plays through Saturday. There are smiles everywhere. Hot cider and home-baked cookies are for sale. And once you’re inside the theater’s cavernous auditorium, the music and personalities of the 39 female singers, musicians and dancers maintain the glow.

As much as anything, “Between the Worlds” seems to be a sharing: performers sharing with one another and then the audience as they mark the end of one season and the beginning of another.

Though it has a gentle arc and sections of dance and puppetry, this show is far more concert than play. It begins with a single white-clad woman sitting on the stage manipulating a small bellows that produces a droning tone. Slowly, the space in front of her fills with the other performers, all women wearing white.

They slowly circle, joining in a song called “Round and Round”, which includes the central phrase “the Earth is turning”. Other songs from a variety of cultures follow, each tied in some way to the end of fall, the arrival of winter and the promise of spring.

There are dances, the most splendid of which is performed by Esther Ouray and Alexis Vaubel as a pair of red- and purple- feathered birds preparing to fly south. Puppets are frequent presences, many of them appearing in a whimsical short story about going to bed and being whisked away into a land of dreams.

By the show’s midpoint, the performers have discarded their white robes and dresses to huddle beneath the dark and cumbersome garb of winter.

The songs are well sung, and segue easily into each other, though the closing numbers are not clearly delineated or easily distinguishable.

There are times when one wishes for tighter direction, a touch more theatricality and more polish, but then one remembers that warmth and community are what really make this troupe tick.