The culminating events were a cultural and political MayDay Festival on May 1 and a high school led celebration May 6.

In preparation for these events, our community partners engaged youth and families in a series of art-making workshops.

Our community partners built a web of local connections, working towards shared community ownership of MayDay.

Kalpulli KetzalCoatlicue collaborated with organizers from MIRAC (MN Immigrant Rights Action Coalition) to recruit powerful speakers and grassroots groups to table at the May 1 festival. They worked with organizers at UNIDOS as well.

Roosevelt HS invited arts organizations like Juxtaposition, Film North, and Northern Clay Center to present live art-making at their MayDay celebration for students and their families to enjoy.

Thanks to our generous donors HOBT funded these MayDay 2022 celebrations.

Click to enhance the image. Photos by Spencer Joles. 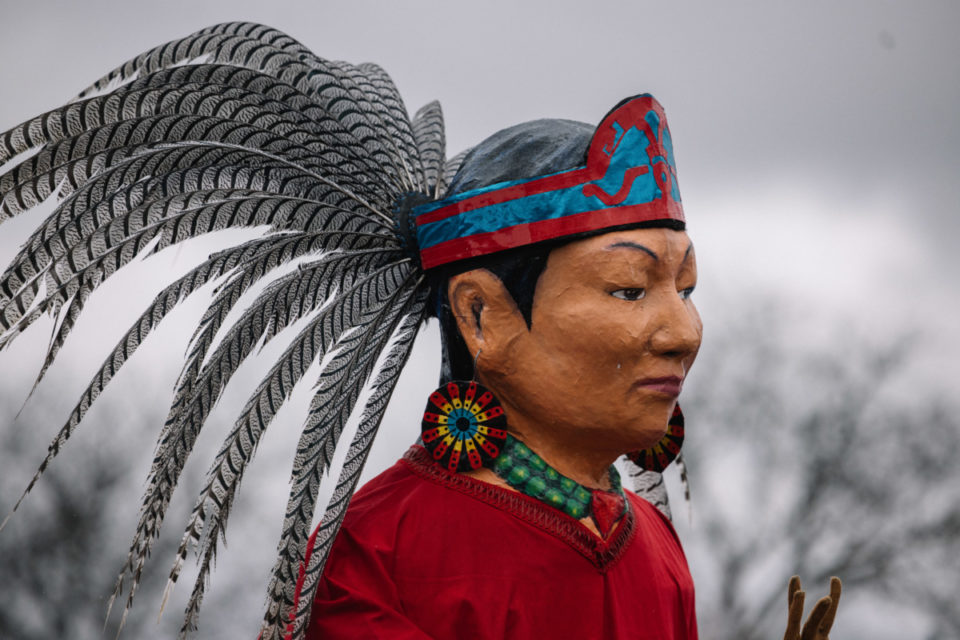 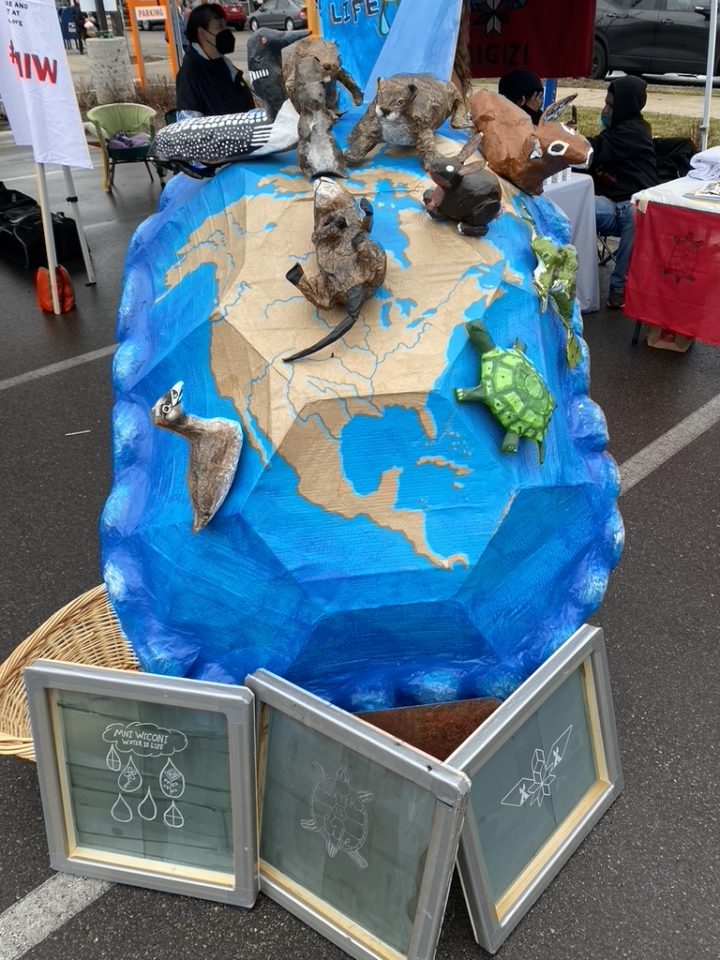 Image Description: A photo of MIGIZI's turtle puppet painted as the earth with small animal sculptures attached and three screen prints in front. 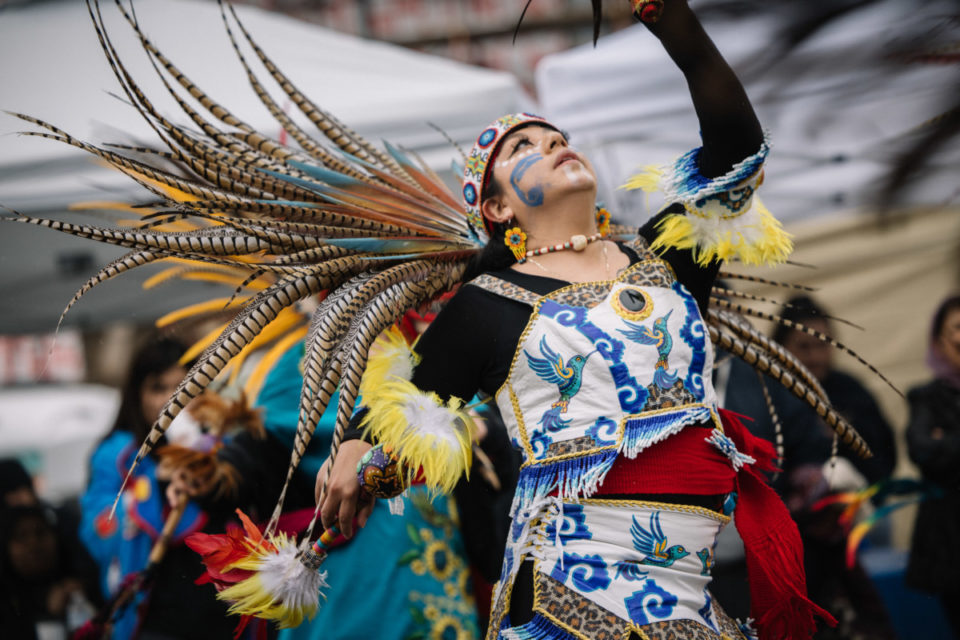 Image Description: A photo of one of Kalpulli KetzalCoatlicue's dancers in traditional regalia mid-dance. 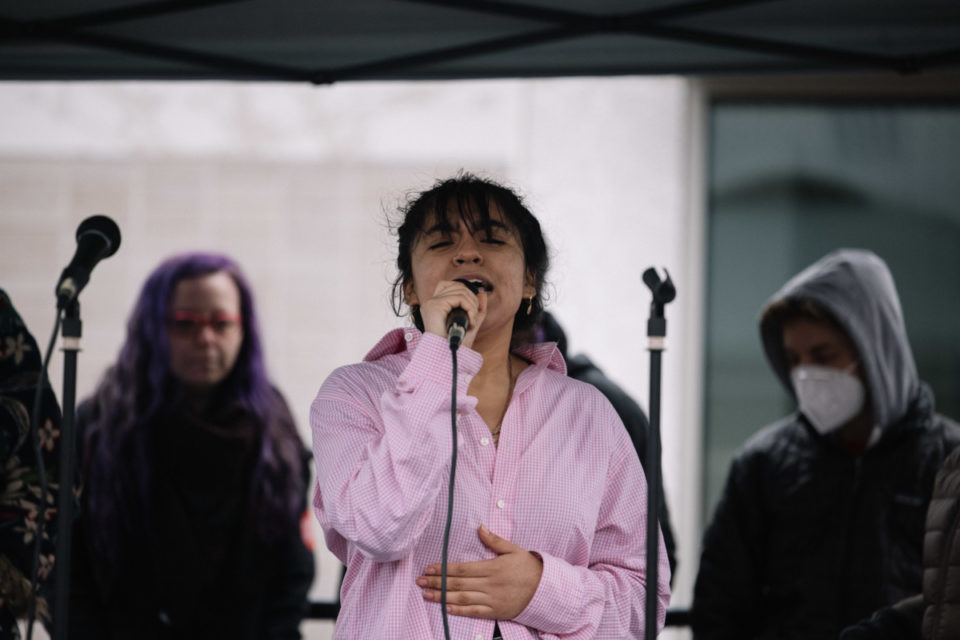 Image Description: A photo of one of the political speakers on stage appears, a young person mid-speech. 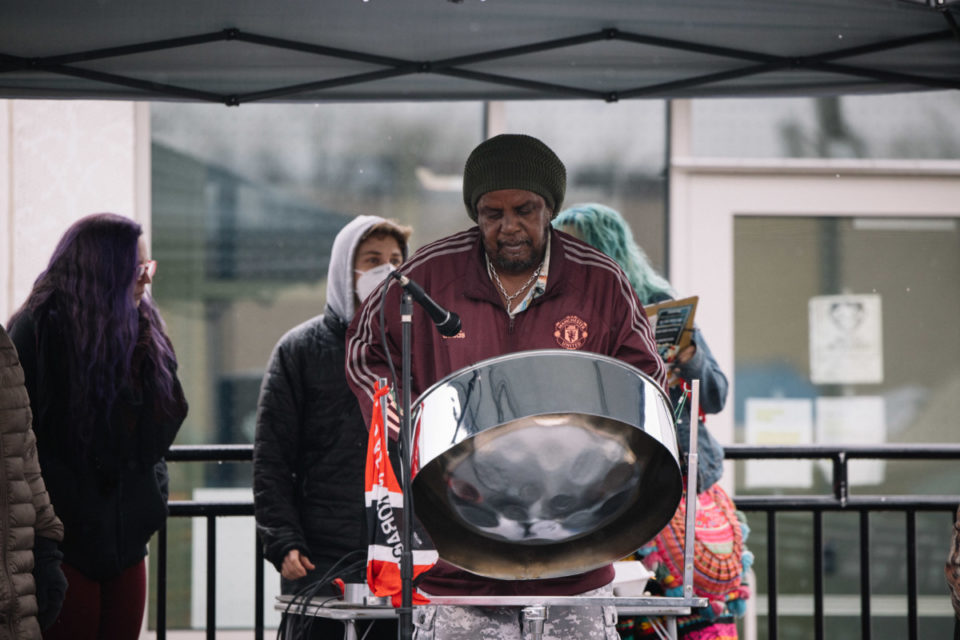 Image Description: A photo of one of the steel drummers on stage playing. 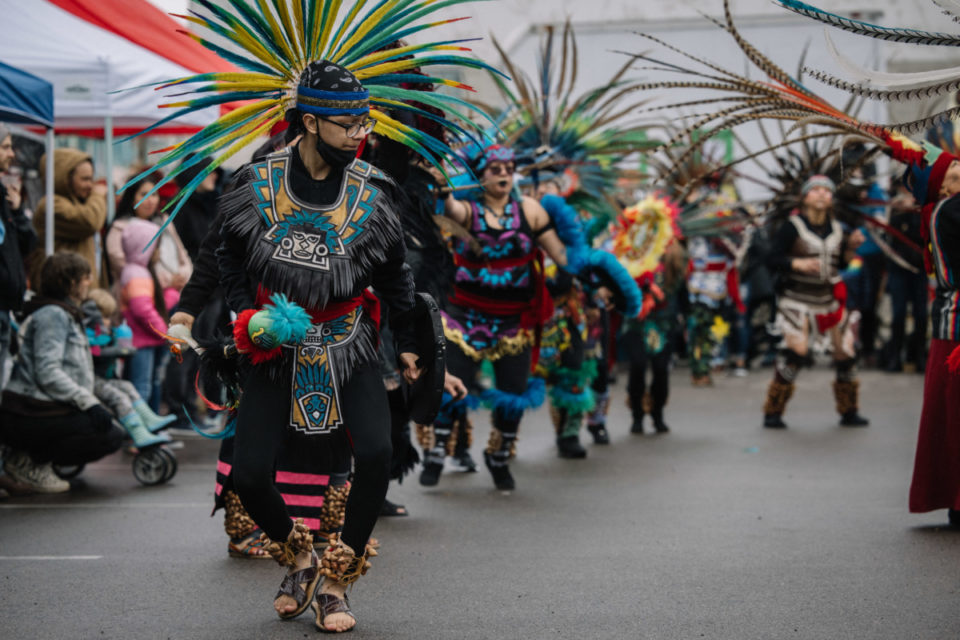 Image Description: A photo of Kalpulli KetzalCoatlicue dancers gathered together mid-dance in traditional regalia with instruments as a crowd looks on. 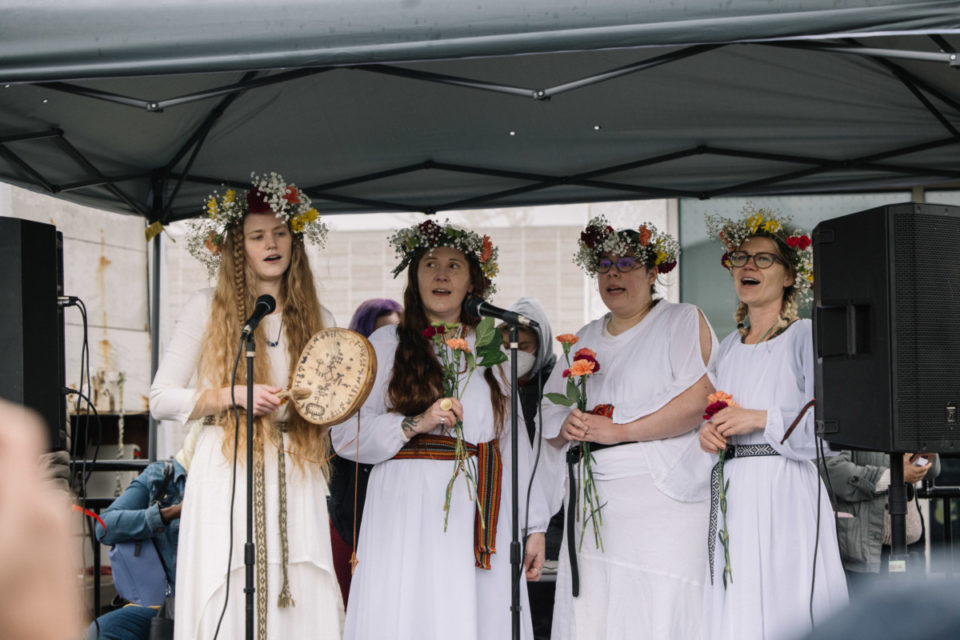 Image Description: A photo of the Daughters and Sons of Yta, Scandinavian dancers sing on stage dressed in white with flower crowns holding flowers and instruments. 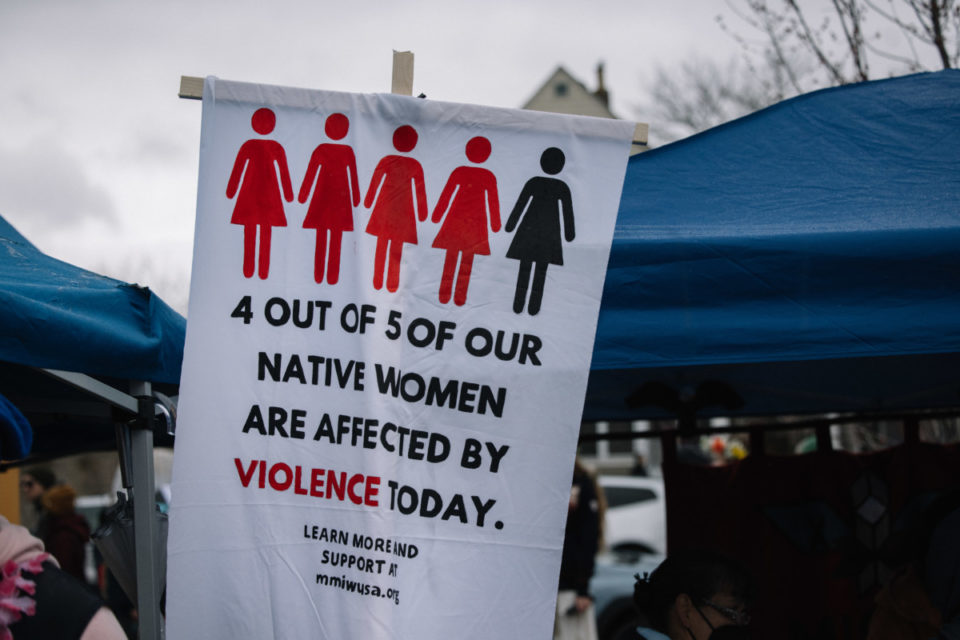 Image Description: A photo of one of MIGIZI's signs with text that reads "4 out of 5 of our Native Women are Affected By Violence Today," with 4 symbols of women in red and one in black. 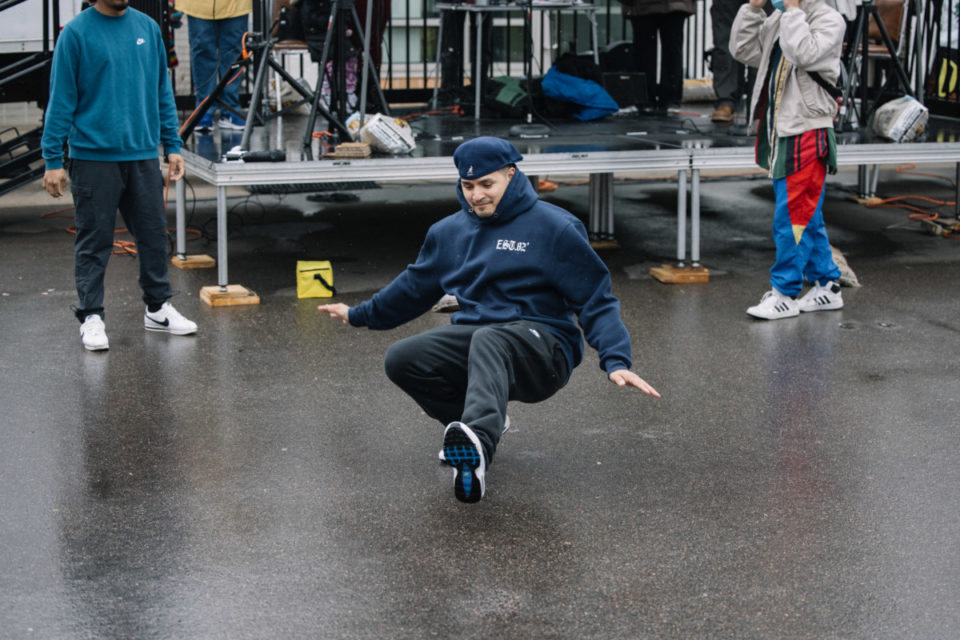 Image Description: a photo of one of the dancers from the Twin Citiez Breakerz kicks their foot out, low to the ground, mid-move.

MayDay Behind the Scenes Mini Doc

We interviewed MayDay Council members, teachers, young people, and artists about their experiences dreaming up & making MayDay 2022 celebrations a reality. This mini doc offers one window into the work and process. Closed Captions are Available.
Image Description: A youtube video still shows a teen in an art room with a yellow felt puppet.
Videography & editing by Yanimadeit
Additional videography by Zephyr Sheedy & MCN6

That Was Funded by You!

HOBT proudly funded MayDay 2022 celebrations through a combination of expense savings and dollars donated directly by you. For the first time ever, HOBT live streamed the MayDay Festival. We provided ASL interpretation, an accessible stage for performers, and other festival logistics.

In addition, each community partner received $10,000 from HOBT to deploy for their MayDay project. Here's how our partners used those funds:

Watch the MayDay Festival as Streamed on May 1, 2022

This is recorded footage from the MayDay festival, the first event of MayDay Season 2022. The festival took place on May 1, 2022, in the Four Directions Family Center Parking lot. This event was hosted by Kalpulli KetzalCoatlicue and MIRAC with support from UNIDOS and El Colegio. Numerous community organizations set up tables. Community partner MIGIZI, hosted live screen printing. Grassroots organizers spoke on labor and immigration issues. Local artists performed poetry, song, and dance. Watch this video by MCN6 to see the May 1 speakers and performers.

MayDay on May 6 at Roosevelt High

The second event of the MayDay Season 2022 took place on May 6, 2022, on campus at Roosevelt HS. This event was planned by Roosevelt staff and students with support from the MayDay Council. The event featured student art, giant puppets, musical performances, graffiti art-making led by Juxtaposition Arts, a live dance class, a chance to practice film-making with film north, and so much more! Here's a behind-the-scenes video showing just some of Roosevelt's beautiful MayDay celebration.

You, along with funders and foundations in Minnesota and beyond, chose to invest in community and keep MayDay alive. Just look what you funded:

You funded powerful voices being heard.

You funded artistry with the authenticity the world needs right now.

You funded performers getting paid for their skills.

Our "Feed MayDay 2023" bird was hungry for donations, but also wishes for MayDay seasons to come. People were invited to write on "berries," "fruits," "worms," and "greens" at the MayDay Festival.  Click on the thumbnails to read some wishes. 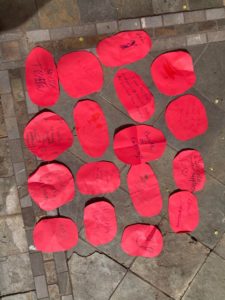 Image Description: A photo of red MayDay wishes appears. Some text of these wishes reads: "I wish to make puppets with my beloved community again," "that we see blossoms this Spring," "I want the people to wise/wake up and call back the sun and stay wise," "Birds!" "Parade of Cats," "I wish the worker happiness," growth," "community building parade stress-free," "healthy family," "more puppets," "to have the earth turn green again." 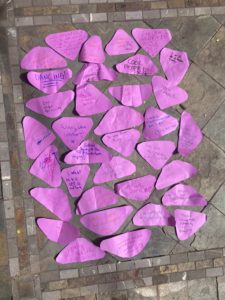 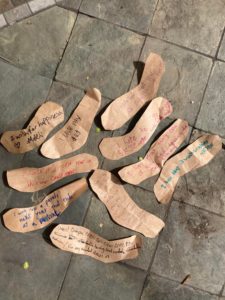 Image Description: A photo of brown MayDay wishes appears with some text that reads: "I wish for happiness," "I wish that this year or next year COVID ends," "I wish for a parade next year that ends at a festival," "I hope that everyone is kind and loving to each other," "I hope that it won't be raining next year," "healing and love for this community and the world, may the work that has been done continue with future generations," "minimum wage, affordable housing, rental control, affordable medicine, CPAC" 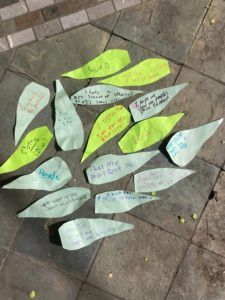 Image Description: A photo of green and blue wishes with some text that reads: "I dream there will be no racism," "bring back the parade," "I hope we show the peoples power en masse," "I hope people can get things to eat," "I wish for peace to the world," "higher wages for the workers," "

You can support MayDay2023 directly at our dedicated GiveMN page.