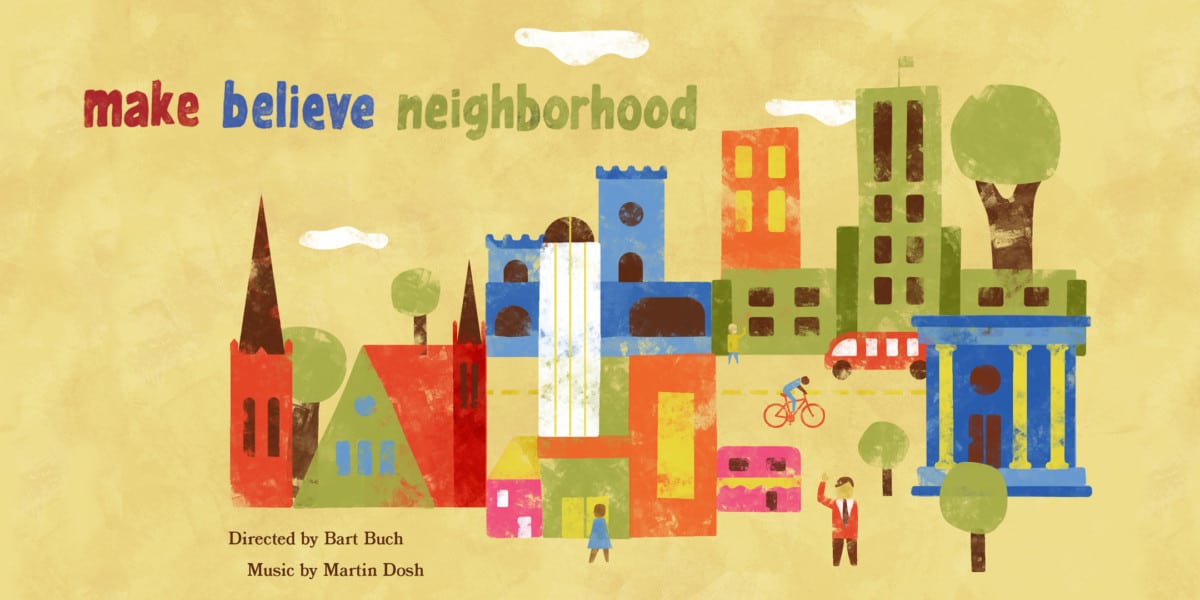 Make Believe Neighborhood celebrated Mr. Rogers and the neighborhood helpers he told us to look for – the ordinary people who do extraordinary work to make our own neighborhood a brighter, healthier, friendlier place.

Together we explored different aspects of Fred Rogers’ amazing life; he was an advocate for children, an artist, a friend, and a peace activist. At the same time, shone a spotlight on some of the neighbors who have made our own community what it is today.

We celebrated the 50th Anniversary of the show Mr. Rogers Neighborhood with a special performance on Monday, February 19, 2018.

"As I watched one tiny puppet give another a piggyback ride, supported by four skilled, human hands, it occurred to me that puppeteers are a special kind of “helper” and that, as theatergoers participate in the act of imagining their puppets to life, so are we."

"Make Believe Neighborhood is highly recommended, especially if you want to expose your child to a piece that - like Mister Rogers Neighborhood - speaks to them directly about big topics and big feelings with honesty and care."

"Somehow, a puppet show that tells the story of Mister Rogers, Lives of the Saints-style doesn’t grate, instead it legit mashes up your heart, transcends politics, and makes you feel more tender toward the people that hold this neighborhood together—what the show refers to as “neighborhood helpers.”

"If kids in Phillips who are learning to stilt can get up when they fall, maybe we can, too. Maybe we can wave to our neighbors and tell our loved ones we like them just the way they are. Buch doesn’t chart pie-in-the-sky, Impossible Dream territory, but real life and its possibilities...This is a show with a huge beating heart, piles of positivity and the conviction that we can survive anything and be the fine, upstanding, loving, accepting people we’re meant to be." 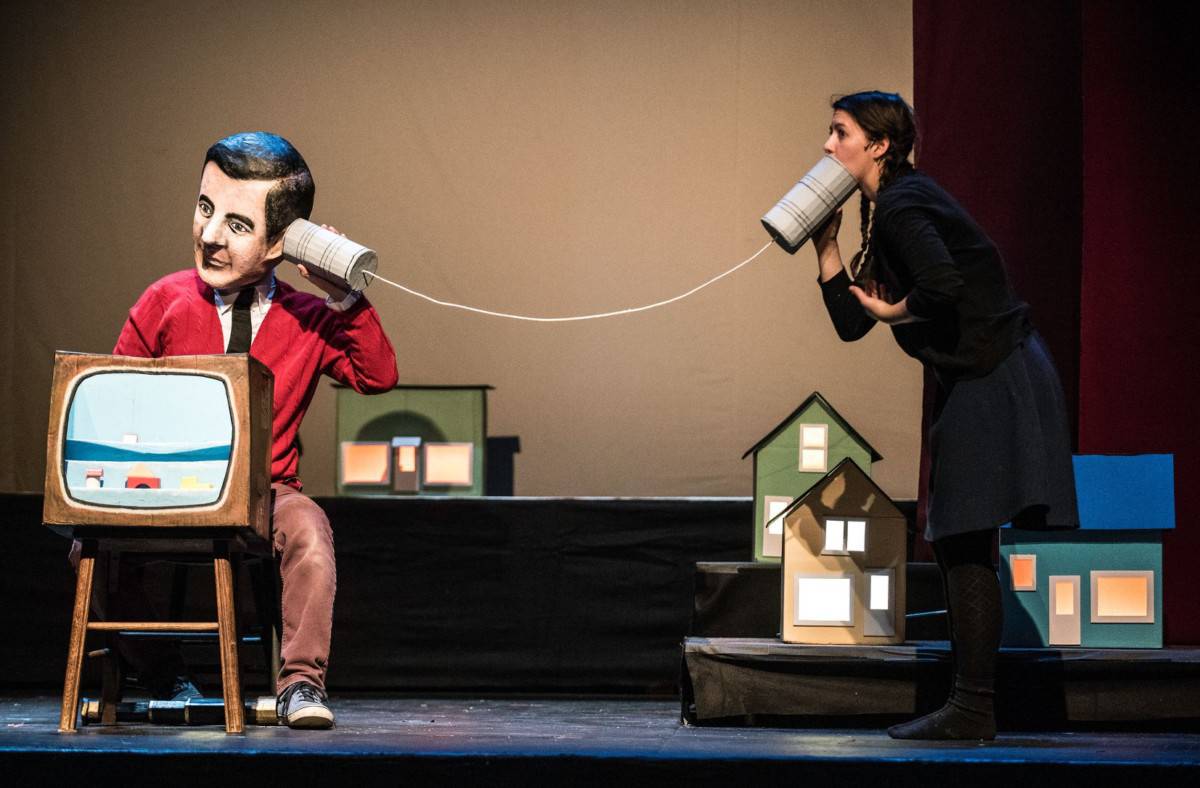 The People That you Meet, Minnesota Playlist, February 8, 2018

It's a beautiful day for Heart of the Beast's tribute to 'Mr. Rogers' Neighborhood.' Star Tribune, February 7, 2018

A Chat with the Characters in Heart of the Beast's Neighborhood, Mpls. St.Paul Magazine, February 25, 2018

I found Mister Rogers’ Neighborhood when I was three years old, and subsequently discovered the creator and host of the program, a gentle, calm, and caring man named Fred Rogers, talking directly to me. Like millions of other preschool-aged children, I was mesmerized by this show that was designed especially for my social and emotional development. Millions of children around the world instinctively knew, and still know, Fred Rogers was giving us something unique and invaluable we needed to grow.

As a young adult, I feel I was called, like Fred, into a vocation working with children and youth. My calling was also similar to Fred’s in that it addresses the social and emotional aspects of youth development; especially creative self-expression. A vocation to work with puppets called soon after. I feel a kinship with Fred through our common work, love of puppets and music. I have always wanted to create a puppet show – or even a whole parade – to honor his profound work and legacy that quietly, gently changed the world.

When the opportunity to create a larger show came up at HOBT, I thought – This is it. Let’s do a show about Fred Rogers. But what would Fred want me to do? Would he want a show just about him? No, he’d want me to look around at my neighborhood. In the early phase of the project, I also wondered what story can I tell that needs to be told? The answer that stuck out clearly was that I can help to tell the story of the neighborhood I live and work in, with my neighbors. So I’m doing both, exploring my neighborhood’s story and my hero Fred Rogers’ story through this puppet show.

Fred often talked of when he was a child and would see something scary in the world or in the news. He would say that his mother told him to always look for the helpers. She would say, that in any dangerous or scary situation, remember there are helpers, and look for them. Fred took that advice and made it part of his life, work and art, consistently shining a light on the neighborhood helpers. I took that advice also for this project.

In the summer of 2016, three youth apprentices from HOBT’s Phillips Project and I went out into the Phillips Community neighborhoods to find and video-interview “helpers.” We interviewed over 30 helpers, and developed a list of dozens more we could have gathered. This work became a great inspiration to me. The work became the core theme of our youth programming for two years, exploring, collecting, and developing neighborhood helper stories with youth, artists and neighbors. Our neighborhood is the most culturally diverse neighborhood in the state, a good representation of the world living in this one place, full of positivity and hope. This richness is astounding, as there are many challenges and problems that form a microcosm to the challenges of our country and our world. The summer we conducted the video interviews, crime and violence were especially present right outside the doors of the theatre and all over the neighborhood. I felt we needed to tell these positive stories to hold up the incredible positive work going on despite the problems, especially then, and especially now that greed and hate have gained a new foothold of power in many places.

In this project and in this puppet show, you will see and hear many people telling these stories. I am extremely humbled and extremely grateful that they have joined in the storytelling. Thank you so much! I feel we are in-between stories right now, in our culture, in our country, and in the world. And the more we share our own stories and wield our creative self-expression, the more we help to write this new story, and we really need this new story. Let’s make that story and believe in it, now and together!

This project was supported in part by an award from the National Endowment for the Arts. This activity was made possible by the voters of Minnesota through a grant from the Minnesota State Arts Board, thanks to a legislative appropriation from the arts and cultural heritage fund. ASL interpretation and audio description was available.