Directed and designed by Sandy Spieler with the HOBT company.

Based on the ancient legend of the Italian gift giver, La Befana reveals the splendid wonder of common things.

With big and little puppets and lots and lots of music, we travel around the world with the old woman Befana as she goes in search of the Holy Child only to discover that holiness lives in the hearts of all children.

Combining both the sacred and secular themes of the season, this is a luminous tale for audiences of all ages and many traditions.

"'La Befana' is an aural and visual feast – you simply can't wait to see what kind of puppet will come out." -Jaime Meyer, StarTribune 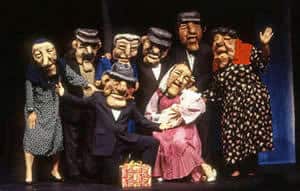 Directed and designed by Sandy Spieler with the HOBT company

After a five-year absence from our stage, In the Heart of the Beast presents its classic adaptation of the ancient Italian legend, La Befana. With big and little puppets and lots and lots of music, audiences will travel around the world with the old woman Befana as she goes in search of the Holy Child — only to discover that holiness lives in the hearts of all people.

Combining both the sacred and secular themes of the season, La Befana’s revelation of the awesome wonder of common things and the rich value of simple gifts will inspire audiences of all ages and many traditions.

Heart of the Beast Infuses La Befana with Nobility

Good things are happening in the cozy, kid friendly Heart of the Beast Puppet and Mask Theatre. "La Befana," the thousand-year-old, potato-faced adventurer, is back for the 13th time, and she's still finding beauty and holiness and all sorts of friends around the world.

She still hangs out with polar bears and giant turtles. She still travels by submarine and helicopter in her search for "the holy child" who lives under a star. She still has an unlimited supply of presents for kids of all ages, hidden in the house she carries on her back.

From the 15-foot-tall kings who inform the old woman's mission to the tiny hand-puppet Befana who walks through a flower bed that fits into a suitcase, this production is as spell-binding as the 12 before it. Those who have seen it in years past will recognize a few of the masks and peripheral characters. This year, however, Befana comes across some contemporary problems in her travels, including faceless French folks trying to test nuclear weapons in the sea.

Though the legend of La Befana has been handed down largely as a happy-go-lucky children's folk tale, director Sandy Spieler takes the material very seriously. One of the loveliest aspects of this company's identity lies in its ability to infuse every element of art with a sense of nobility. This production contains enough whimsy and humor to fixate even the twitchiest child, but there is also a sorrow and urgency in this year's show that may affect adults who see it.

The same gorgeous clarity of purpose that pervades the company's annual May Day celebration in Powderhorn Park is evident in "La Befana." In her director's notes, Spieler speaks out against the poverty and violence that are part of so many children's lives. In her work, she makes a heartfelt plea to share respect for the world and its people.

This winter, La Befana isn't just searching for the holy child. Even though she thrives through a wonderful journey and discovers the magic within herself, her soul seems heavier, her gait more plodding. This season, La Befana is seeking a real lasting peace. 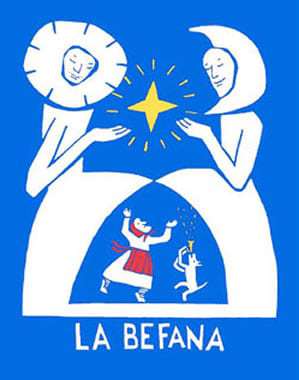