Written and Directed by Steve Ackerman

A live-action recreation of the fictional animated series, Tummy da Talking Turtle, Cartooon returns to the HOBT Mainstage after drawing rave reviews in its 2013 Puppetlab premiere.

Notes and apochrypha from Tummy da Talking Turtle's imagined run include the following short description: "The controversial animated program Tummy da Talking Turtle Sucks on Piano Keys was created by Earl Dives and Gerry 'Crackjaw' Sanders while sharpening their lumberjack axes in the fall of 1940. Earl was a balding Protestant with a penchant for soft whiskey. Gerry loved the smell of tar and gasoline. Knowing nothing about animation, children, or public decency, the two cobbled together a flipbook of crude dynamite related drawings. Only one episode of the show was created. It was a failure." 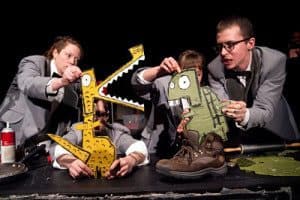